Those of you who have been waiting to get your hands on The X-Files: The Complete Fourth Season probably already know what's in store — even more details on the "conspiracy" that FBI agents Fox Mulder (David Duchovny) and Dan Scully (Gillian Anderson) have yet to fathom. Starting with the distinctive "Herrenvolk" and its Children of the Corn stylistics, we soon learn the fate of "X" (Steven Williams) and also meet the mysterious Marita Covarrubias (Laurie Holden), while the later "mythology" episodes "Tunguska" and "Terma" find Mulder captive in a Siberian gulag and Alex Krycek (Nicholas Lea) in a worse spot; "Tempus Fugit" and "Max" concern an airline crash that Mulder believes resulted from a UFO collision; Scully begins treatment for her cancer in "Momento Mori"; and the cliff-hanger "Gethsemane" finds Mulder left for dead. However, a common fan-fave is the quirky "Musings of a Cigarette Smoking Man," wherein we learn the history of "Cancer Man" (William B. Davis) as told by Frohike (Tom Braidwood) — a failed spy-novelist who has risen to control a vast international cabal. But only nine of the 24 episodes in this box are part of the "mythology" arc, and some of the best stand-alone spots include the ultra-controversial "Home," which was initially buried by the network after its first airing on October 11, 1996; "Leonard Betts," with a cancer-eating, regenerating man (Paul McCrane, aka Dr. Romono on "ER"); and "Sanguinarium," where a vain plastic surgeon who, with the help of black magic, sacrifices his patients to maintain his appearance. Also memorable is the almost-kiss between Mulder and Scully in "Small Potatoes," while the (ahem) less-memorable "Never Again" is noteworthy for Jodie Foster's guest-spot as the voice of a Betty Page tattoo that influences its owner when it speaks. As with the previous seasons, Fox's X-Files Season Four DVD collection offers more than just the season's episodes. The first six discs include 24 episodes, deleted scenes, one minute international clips (in German, Japanese and Castillian), and two full-length commentaries for the episodes "Momento Mori" and "Small Potatoes" with writers Frank Spotnitz and Vince Gilligan respectively. The seventh disc comes loaded with extras, which include a 30-minute documentary "The Truth About Season Four"; separate three-minute interview clips with series creator Chris Carter and writers Frank Spotnitz, James Wong, and Vince Gilligan; eight special effects clips with commentary by co-producer Paul Rabwin; nine deleted scenes with optional commentary by Chris Carter (including Mulder and Scully's first on-screen kiss from "Momento Mori"); thirteen 60-second "Behind the Truth" promos from F/X cable network; the original promos for all 24 episodes, including both 10-second and 20-second spots; and the DVD-ROM game, "Urbs Tercia." Like the prior boxes, this collection comes packaged in the folding DVD digipak in a paperboard slip-case. 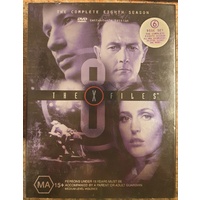