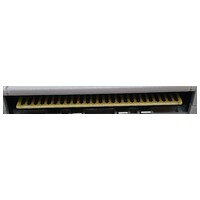 It's a Bumpin', Bruisin', Brawlin' Bash! The many worlds of Nintendo collide in the ultimate showdown of strength and skill! Up to four players can choose their favorite characters - complete with signature attacks - and go at it in Team Battles and Free-For-Alls. Or venture out on your own to conquer the 14 stages in single-player mode. Either way, Super Smash Bros. is a no-holds-barred action-fest that will keep you coming back for more!

All of your favorite Nintendo characters have come together to answer the question: who is king of the Nintendo hill? The format can aptly be described as Super Mario Kart meets Mortal Kombat, which makes for an odd, yet addictive game. The object is to throw, punch, smash, or blast your opponents off the edge of the beautifully rendered, themed arenas. Numerous power-ups, weapons, and surprises help or hinder the melee. Your eventual goal is to fight your way through to a bizarre final boss character. Victory in this battle rewards you with another character to play, such as the scene-stealing Pokémon, Jigglypuff.

From Star Fox's laser pistol to Link's hook shot, each character's trademark special abilities are utilized to knock one another off the screen. The game does a great job balancing the characters' widely differing powers so that no one character has an insurmountable advantage. The sound and animations are also dead-on: Donkey Kong is a huge, cartoonish ape, while Link is much more detailed and realistic. And Pikachu's famous thunder shock attack is accompanied by a fearsome yell of "PIKA!"

Unlike most fighting games, Super Smash Bros. allows you to team up with a computer partner and take on other teams in both single and multiplayer modes. But the most fun is had when four human players play in a battle royale. The game quickly becomes a scene of incredibly fun chaos: picture Mario beating up on Luigi, while Donkey Kong is chased by a scampering, sledgehammer-wielding Pikachu. It's the perfect party game.

Cart is in great condition, With a bright sticker, with no lifting or tearing.

Item pictured is item you will receive. Covered by our 30 Day Pawnbroker's warranty.