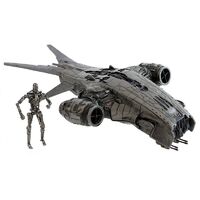 Set in post-apocalyptic 2018, John Connor is the man fated to be the leader of the human resistance against Skynet and its army of Terminators. The future he was raised to believe in is altered by the appearnce of Marcus. Connor must now decide whether Marcus has been sent from the future, or rescued from the past.